SciMLCon 2023 at the Kennedy Space Center? Take the SciMLCon survey to give your input!

This release had a major focus on high-level user issues such as error messages, compile times, and documentation generation. Other related issues, such as code style enforcement, have also seen huge overhauls in this ecosystem update. From all of this, the documentation of SciML post summer 2022 has essentially been completely overhauled and improved! 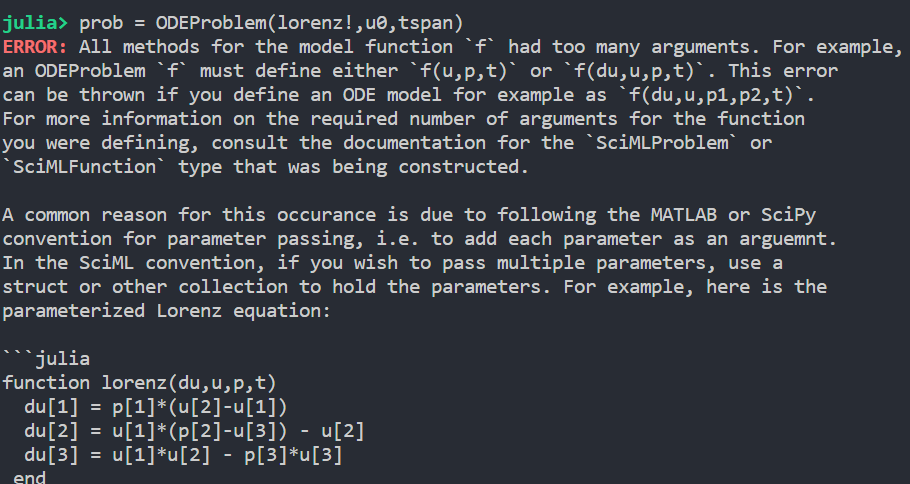 With that, let's start showing some details!

One of the major changes in this version of SciML is that high-level error messages have been introduced for many common issues. These give customized and context-dependent information to make it much easier to comprehend the pieces. For example, let's take a look at what happens if someone attempts to solve an incompatible ODE definition. Let's take the Lorenz equation, but with the issue of having too many arguments in the ODE definition:

This is a common issue that we see from users coming from a MATLAB background, where "add more arguments" is the convention there. So what does the error look like:

Lots of knowledge from common user issues and backgrounds was pulled from the Julialang Discourse in order to help identify where the misconceptions come from and give very detailed responses. We hope this makes the library a lot friendlier to newcomers.

Many New Docstrings in SciMLBase.jl

The high level interface functions, such as solve, ODEProblem, etc. have received greatly improved documentation. For example, if you run ?ODEProblem in the REPL, you will now see the following:

The DifferentialEquations.jl documentation has been restructured to make use of these docstrings.

The entire SciML organization updated its practices to have a well-defined style guide called SciML Style This style guide is comprehensive, covered high-level details such as whether to prefer the use of closures or not, to lower more mundane details like the proper style for continuing equations to the next line. It has quickly become one of the most widely used style guides for Julia packages. For more information, please check out the style guide's documentation.

With this, all of the libraries now make use of JuliaFormatter.jl to automatically enforce style rules. When new changes are made to the repo, style enforcement is required, and for example contributors are required to run commands like:

in order to reformat their code into the SciML style. This ensures that the code is more uniform across contributors, making it easier to read, understand, and contribute.

The NeuralOperators.jl library has been added to the SciML ecosystem. This library covers techniques like Fourier Neural Operators, DeepONets, and more. We have demonstrated that these implementations outperformed the original ones by around 3x, and we believe there are many more tricks to employ to eek out a bit more performance as well. We plan to continue improving these techniques, along with integrating them into the NeuralPDE.jl physics-informed neural network (PINN) framework for physics-informed neural operator approaches. More on this coming soon!

The PolyChaos.jl library has been incorporated into the SciML ecosystem to give fast and accurate polynomial chaos expansions through multiple dispatch, similar to ForwardDiff Dual numbers in some sense. This is then being used in other projects to make it easy to develop codes for model order reduction and uncertainty quantification. We are excited to ensure the maintenance and longevity of this crucial building block, and already have a planned package release which makes use of this functionality.