SciMLCon 2023 at the Kennedy Space Center? Take the SciMLCon survey to give your input!

JuliaCon showcased a many SciML users demonstrating how they were using the libraries for automated discovery of physical parameters from videos, for simulation of single-cell biology, and more. However, we continue to extend our interfaces and thus help these scientists grow into new domains. In this ecosystem update there was a lot of focus on expanding the SciML Common Interface, making the "one stop shop" interfaces seen in DifferentialEquations.jl expand to domains such as nonlinear solvers and optimization. This all now has a specification and documentation at a high level, and over the next few releases we will be working to ensure that the full common interface covers all of the relevant solvers in an automatic differentiation compatible manner.

NonlinearSolve.jl is the package for the common interface over nonlinear rootfinding, i.e. f(x)=0 problems and solvers. It now has a documentation which shows how to use NLsolve.jl, MINPACK, Sundials, and other NonlinearSolve.jl unique methods for solving such equations in a high performance manner. This interface is fitted with the adjoint sensitivities of a nonlinear solve, which is able to compute the derivatives without differentiating through the iterations of the solving method. This library has integrations with ModelingToolkit.jl, so NonlinearSystems can generate NonlinearProblems which are then solved via the common interface provided here. And similar to the other interfaces like DifferentialEquations.jl, it's type-dependent, allowing the user to compose the with all of the functionality of the Julia ecosystem.

For a test of the flexibility, here's a high-performance small linear solve which uses StaticArrays to improve the performance:

With the common interface covering so many domains, we have put together a SciML Common Interface Documentation which outlines the core tenants of the SciML common interfaces, how they interact, what packages are associated as the user-facing front to the interfaces, and more. We plan to use this to ensure that the interfaces for optimization, quadrature, ODE solving, nonlinear solving, etc. all look and feel the same, with the same integration with automatic differentiation and similar naming schemes to all of the shared arguments. By doing so, we hope this will further lower the barrier to entry for new Julia users interested in technical computing.

SBML files are commonly used throughout systems biology and systems pharmacology for allowing exchange of ODE models. In this ecosystem release we showcase SBMLToolkit.jl as the tool which integrates the SciML ecosystem with this world of model exchange, allowing users to easily import models from SBML sources like the SBML Biomodels Repository and SimBiology. For more details on this topic, see the JuliaCon 2021 video Systems Biology in ModelingToolkit.

DiffEqFlux.jl and DiffEqSensitivity.jl now include a load of heuristics for automatically choosing optimal adjoint methods for the derivative calculation. Thus we now recommend that users do not generally choose the sensealg, i.e. choices like solve(prob,Tsit5(),sensealg=QuadratureAdjoint(autojacvec=ReverseDiffVJP(true))) since in many cases the automatic selection algorithm will be able to outperform the user, in which case solve(prob,Tsit5()) should now be a lot faster! This will intelligently switch between forward and reverse mode, choose vector-Jacobian product techniques most applicable to the code, and use compiler-based analyses to enable extra optimizations. We hope most users notice improved performance without having to do anything!

One of the major problems in ModelingToolkit.jl was the scaling of symbolic analyses. If every variable had to be explicitly represented, then it requires O(n) memory and O(n) compute to handle analyses, code generation, and more. Array symbolics allows for representing arrays as a single symbol in an alternative algebra (i.e. no commutativity in general matrices). Now @variables x[1:10000000] runs in O(1) time, and actions like sum(x) are represented lazily and transform into looping code. Array symbolics still needs more work to be fully functional, but users can see a lot of wins even at this stage.

Note that if user code is upgrading, scalaring the symbolic array can be done by iterating the indexing into an array, i.e. collect(x) will act like the previous representation using a standard Julia Array filled with symbolic values.

The DiffEqSensitivity.jl derivative overloads are now able to handle chaotic dynamical systems via forward and adjoint sensitivity analysis methods. For more information on these techniques, see Frank's blog post on their development.

The event handling detection in the DiffEq solvers has improved enough to now be able to have handling of accumulation points. The new tutorial shows how to make approximately infinitely many events be handled with ease! 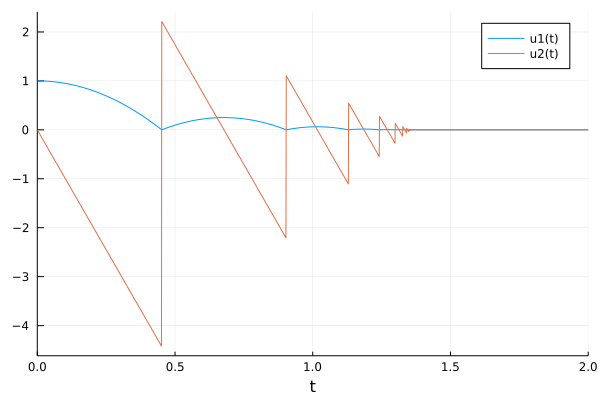 The sensitivity analysis methods can now make use of the Enzyme.jl automatic differentiation package in its vector-Jacobian product calculations. Importantly, this library able to efficiently handle mutating code, making some of the most common high-performance coding styles for large-scale ODEs and PDEs be something that now has high-performance adjoints without modifications to the original code! Turning this on is done simply by the autojacvec=EnzymeVJP() option, though as noted above an automated heuristic will be able to detect Enzyme compatibility and automatically use the EnzymeVJP when applicable.

GalacticOptim.jl now interfaces with MathOptInterface.jl, the solver backend behind the JuMP libraries. This means that many new solvers, such as IPOPT, can now be used from the same interface that is commonly used for applications like neural ODEs.