Another month and another set of SciML updates! This month we have been focusing a lot on simplifying our interfaces and cleaning our tutorials. We can demonstrate that no user-intervention is required for adjoints. Also, the ModelingToolkit.jl symbolic modeling language has really come into fruition, allowing component-based models and automated parallelism. Indeed, let's jump right into an example.

ModelingToolkit.jl has added the ability to build differential-algebraic equations through acausal component-based models. As an example, let's say we built two Lorenz equations:

We can then define an implicit equation that couples the two equations together and solve the system: 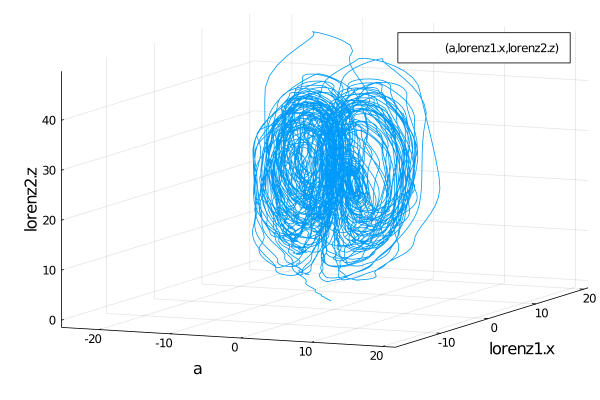 Because of this, one can build up independent components and start tying them together to make large complex models. We plan to start building a comprehensive model library to help users easily generate large-scale models.

We have added the ability to specify compiler targets from ModelingToolkit. If you have a model specified in its symbolic language, it can generate code for C, Stan, and MATLAB. For example, take the Lotka-Volterra equations:

Let's say we now need to deploy this onto an embedded system which only has a C compiler. We can have ModelingToolkit.jl generate the required C code:

Now let's say we needed to use Stan for some probabilistic programming. That's as simple as:

When you mix this with the fact that code can automatically be converted to ModelingToolkit, this gives a way to transpile mathematical model code from Julia to other languages, making it easy to develop and test models in Julia and finally transpile and recompile the final model for embedded platforms. However, this automatic transformation can be used in another way...

Now let's symbolically calculate the sparse Jacobian of the function f!. We can do so by tracing with the ModelingToolkit variables:

Now that we've automatically translated this into the symbolic system and calculated the sparse Jacobian, we can tell it to generate an automatically multithreaded Julia code:

The output is omitted since it is quite large, but the massive speedup over the original form since the sparsity pattern has been automatically computed and an optimal sparse multithreaded Jacobian function has been generated for use with DifferentialEquations.jl, NLsolve.jl, and whatever other mathematical library you wish to use it with.

Indeed, this gives about a 4x speedup on a computer with 4 threads, exactly as you'd expect.

Simon Frost, Principal Data Scientist at Microsoft Health, published an epidemic modeling recipes library, sir-julia which heavily features SciML and its tooling. There are many aspects to note, including integration with probabilistic programming for Bayesian inference. Indeed, the use of DifferentialEquations.jl inside of a Turing.jl macro is simply to use solve inside of the Turing library: no special tricks or techniques required. For example, this looks like:

For more examples, please consult the repository which is chock full of training examples. However, this demonstration leads us to your next major release note:

It's finally here: concrete_solve has been deprecated for, you guessed it, solve. If you want to solve an ODE with Tsit5(), how do you write it?

If you want to differentiate the solution to an ODE with Tsit5(), how do you write it?

If you want to use Bayesian inference on Tsit5() solutions, how do you write it?

This is a step up from where we were. In the first version of DiffEqFlux.jl, we required the use of special functions like diffeq_adjoint to use the adjoint methods. Then we better integrated by having concrete_solve, which was a neutered version of solve but would work perfectly in the AD contexts. Now, solve does it all, and so there is no other function to use.

As a quick demonstration, here's the use of checkpointed interpolating adjoints over a stiff ODE solver.

Note that it's nesting 3 modes of differentiation all in the optimal ways: forward-mode for the Jacobians in the stiff ODE solver, an adjoint mode for the derivative of solve, and reverse-mode for the vector-Jacobian-product (vjp) calculation of the neural network. This means that the DiffEqFlux.jl library is pretty much at its endgame where nothing about your code needs to be changed to utilize its tools!

Next Directions: Google Summer of Code

And many many more. There will be enough that I don't think we will wait a whole month for the next update, so see you soon!