For awhile I have been saying that JuliaDiffEq really needs some fast high accuracy stiff solvers and symplectic methods to take it to the next level. I am happy to report that these features have arived, along with some other exciting updates. And yes, they benchmark really well. With new Rosenbrock methods specifically designed for stiff nonlinear parabolic PDE discretizations, SSPRK enhancements specifically for hyperbolic PDEs, and symplectic methods for Hamiltonian systems, physics can look at these release notes with glee. Here’s the full ecosystem release notes.

Due to JuliaCon we now have a video introduction to JuliaDiffEq!

I find videos to be a very good media for teaching, so there will surely be more to follow.

They have finally arrived. Let me accompany this with an explanation. For lots of differential equation history, Rosenbrock methods have been somewhat niche stiff solvers. Multistep methods like Sundials’ CVODE_BDF is usually the goto method though I explained in depth why this is a bad idea (essentially they work well for very large stiff PDE discretizations, but then using them on a small problem is like using Thor’s hammer to build a fence: the tool is powerful but can be very inefficient outside of its main domain!). radau is a great implicit Runge-Kutta method to default to, but it’s main purpose is high accuracy and it can be very slow when you don’t need too much accuracy. Rosenbrock methods have generally filled the gap for really low accuracy (see ode23s), but never went much further.

But why is that the case? It’s actually very easy to explain. In all other stiff solvers, the method is implicit. The Jacobian is used to make an the implicit equation solver faster, and inaccurate Jacobians don’t actually affect the order of accuracy since it’s all about solving the implicit equation to convergence (though inaccurate Jacobians slow convergence). However, in the Rosenbrock method Jacobians are actually part of the method and its derivation. This means that if the Jacobian is too inaccurate, then you actually lose the asymptotic order of accuracy. In previous diffeq software, this was a limiting factor because most of the time Jacobians have to be estimated, and numerical differentiation has high inaccuracies, meaning there was a fundamental cutoff to how well Rosenbrock methods could do. However, as long as you don’t hit that issue, for example stay at low accuracy or provide the analytical Jacobian, Rosenbrock methods are extremely efficient (see the benchmarks in Hairer’s book as a reference to the fact that this was known).

But we’re in Julia! Not only do we have the @ode_def macro supplying the analytical Jacobian, even for arbitrary Julia functions we can usually use ForwardDiff.jl to get the system Jacobian via autodifferentiation which works to machine accuracy! So the previous issues are thrown out the window, which is why I thought we should revist Rosenbrock methods. So we revisted them well. This release includes the following new Rosenbrock methods:

I gave the theory, but the followup question is, do you have benchmarks to prove the theory? Yes! The DiffEqBenchmarks.jl stiff benchmarks now include the Rosenbrock methods At standard tolerances (1e-2 < reltol < 1e-6), the Rosenbrock methods Rosenbrock23, Rodas3, and Rodas4 together form a group of methods which are 5x-10x faster than the previously recommended Fortran and Sundials methods. Here’s an example benchmark on the VanDerPol problem where the error is at the final timepoint vs a reference solution calculated with tol=1e-14: 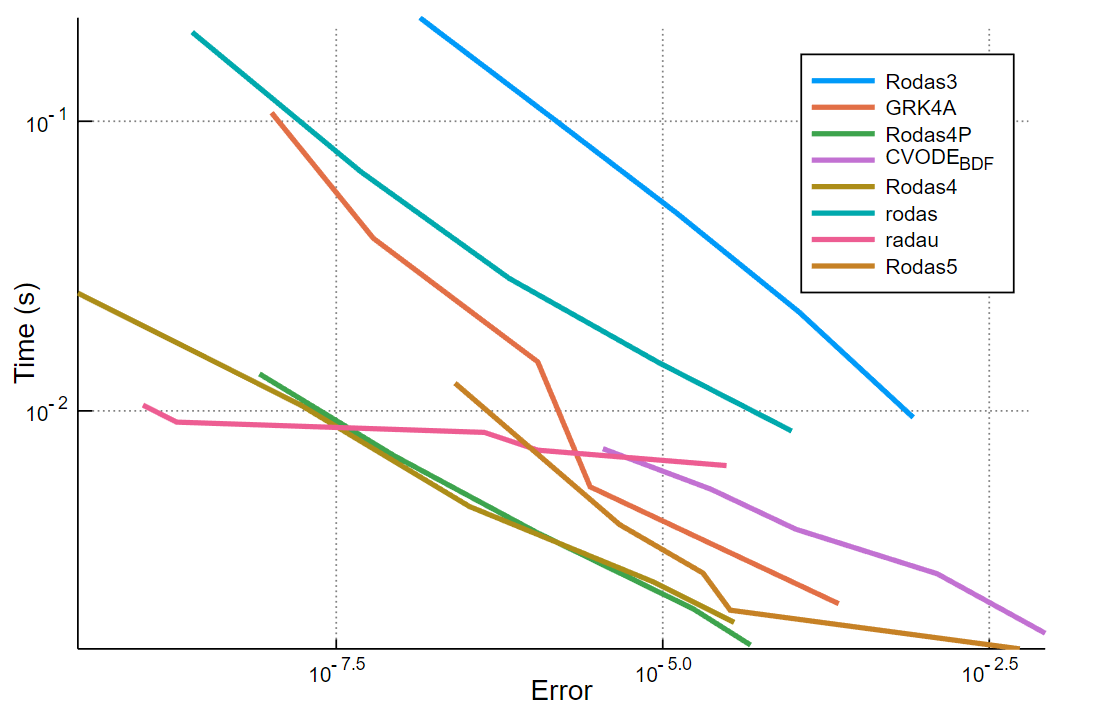 Here we plot error vs compute time, where we are changing the abstol and reltol of the solvers. It’s a small problem, but in normal tolerances it’s already able to distinguish itself. For larger problems where the Jacobian can still be factorized, these methods show even larger performance gains. In additions, these methods are in OrdinaryDiffEq.jl, so they are compatible with the event handling, have “stiff-aware” high-order interpolants, and can use arbitrary precision along with all of the other cool features. For regular sized systems, most users will find this to be a sizable performance enhancement for stiff equations. There are some made specifically for non-linear parabolic PDEs, and many are “stiffly stable”, meaning they can be used for DAEs in mass matrix form.

There is still a lot of work to be done on these. More optimizations can occur, and they need to be made compatible with resizing in events (Rosenbrock23 has this ability and all others can be done similarly, so in the near future these will be fully compatible with everything you can do in events). But, the benchmarks already show that for standard problems, we have a new top level of efficiency and it’s given by native Julia methods!

Rosenbrock methods are not the only new set of solvers which are part of this release. In this release we are also including a full array of symplectic integrators. For those who don’t know, symplectic integrators conserve first integral properties like energy, making them very efficient for long-time integration of Hamiltonian systems. This makes them a favorite amongst physicists. In this release we went all out. The new methods are:

You can read more about them in the Refined ODE Solver docs. We have some new physics tutorials which show how to build a SecondOrderODEProblem and use these methods. They use the same fast Runge-Kutta setup as the rest of OrdinaryDiffEq.jl so they are quite efficient (though they do not include adaptive timestepping, long story there).

Yes, we looked at other categories of solvers. @ranocha put a lot of work into the SSPRK solvers this time around. These solvers have the special property that they conserve monotonicity which is required for solving many hyperbolic PDEs. Before we just had fixed timestep variants. Now we have all of the bells and whistles: adaptive timestepping, dense output which satisfies the SSP property, etc. Essentially it’s all of the tools you’d ask for, except the automatic spatial discretization (of course that’s coming soon!).

Element-wise tolerances let you set different tolerances on different parts of your equation and speed things up. This is something that *DiffEq was missing, until now. This is fully compatible with the integrator interface, so you can even change them on the fly in events.

We have settled the new DiffEqOperator interface which will allow for building methods which require parts of the equation to be a linear operator. It’ll be added to the docs shortly, but it’s allowing us to build all sorts of tools which will take advantage of linearity.

All Around Performance Boosts

Oh boy, big performance boosts. The quick lowdown is this:

You can see the impact of these by checking out the improved timings in DiffEqBenchmarks.jl. Higher order methods got a really nice boost because their startup cost was heavily decreased, making Vern7 and Vern9 look even better than before.

There was a version of OrdinaryDiffEq and StochasticDiffEq which replaced all loops with broadcast. Tests were run and it shows that things like GPUArrays then work directly in the DiffEq solvers. However, broadcasting gave a pretty sizable performance loss, so it was reverted. But the proper issues have been opened in Base, and the tests showed that a wide class of “weird abstract arrays” with performant broadcast overloads “just work” efficiently in the DiffEq solvers. Until this is fixed, we might bring this back for select solvers.

At JuliaCon I was asked if there were seeds for each stochastic simulation. Unfortunately there wasn’t. But that was a pretty good idea, so there is now. Stochastic problems like SDEs now let you set a seed. This then seeds the RNG at the start of the run. If it’s not set, then a random seed is chosen. That seed is stored in the solution type as .seed, so you can always recover how the seed for any solution. Using this the results should be much more reproducible.

This has been a long time coming. It’s known that some of its methods may be giving incorrect results, there are some very slow parts, and it’s missing a lot of the advanced features we need. If you check out DiffEqBenchmarks.jl, you’ll see that ODE.jl’s algorithms diverge on most of the test problems. The library hid this by having very low defaults for the tolerances, but we can do better. Also, it sacrifices a lot of features and speed to get cleaner code, which is a nice tradeoff in some senses but is not something which should be done in a core production ODE solver.

Because of this state for ODE.jl, many users have asked that I formally deprecate ODE.jl in favor of OrdinaryDiffEq.jl in order to stop the confusion around the library. This is the announcement that this has occurred. To help users transition, all of ODE.jl’s algorithms are part of the common interface, so setting the defaults correctly will allow you to exactly replicate your results in the DiffEq framework. All of the packages which had ODE.jl as a dependency received a PR which replaces ODE.jl with OrdinaryDiffEq.jl (note you can directly use OrdinaryDiffEq.jl without the rest of DiffEq, see this page in the docs).

ODE.jl is not going away. I have maintained it for a year, and will continue to maintain it and make sure it exists in a usable state in Julia 1.0. What I will not promise is any new features. ODE.jl is not designed in a manner that makes it easy to develop with all of the bells and whistles, which is why it has been ignored. But your ODE.jl code should continue to run on Julia 1.0 exactly the same as it did before. ODE.jl will still have its place as a nice clean set of algorithms which is good for teaching, and is a low-dependency library (for example, it doesn’t make use of autodifferentiation so it doesn’t have dependencies on ForwardDiff.jl). The library will probably get updates in the future to help it better serve this role.

This was a huge release, with over 30 new solver methods. Surely we won’t have another sprint like that for a little bit. But there’s many things which are pretty far along the pipeline.

These work and just need to be documented and get some tutorials. Technically they might actually be part of this release. The first two can use some more optimizations, but tests are passing on all of them.

This is a GSoC project, and it’s coming along very nicely. It allows you to simply say “I want the 2nd derivative with a 4th order discretization” and get back an efficient operator which does just that, and it’s compatible with numerical linear algebra tools like IterativeSolvers.jl. It may be ready for release by the next ecosystem release.

Directly using ApproxFun’s Fun type will be a topic of long research. But building spectral discretizations of PDEs and solving them with any method on the DiffEq common interface is easy. This already exists and is tested, so check out the package DiffEqApproxFun.jl if you want. It’ll get documented and released.

You can technically throw a stiff solver in there already, but we can make it so that way the Rosenbrock methods are much more efficient by allowing there to be a flag that says “only factorize the first time”. Then, when coupled with Anderson acceleration, we will have very fast tools for most stiff DDEs and stiff delay DAEs (with events of course)! This just needs a few more lines of code and a bunch of tests.

DiffEqPhysics.jl has had some work done on it to make physical modeling easier. By the next release we should have some tools for easily generating N-body problems, automatically converting Hamiltionians into equations of motion for symplectic integrators, and tools to make it easy to define common models like Hamiltonians which arise in MD simulations.

ODEInterface.jl has added a few new things, so we’ll add these to the common interface shortly.

So with all of that above pretty far along, what’s next in the pipeline?